With our unique digital sales promotions you won’t struggle to reach the youth!

Are brands missing an opportunity to enga 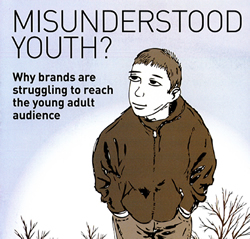 The UK’s young adult population – those aged in their late teens to mid 20s – are savvy consumers to whom online and social media are second nature, which is why so many brands are using digital media in an attempt to reach them.

However, exclusive polling conducted by market research agency ICM on behalf of Promotional Marketing magazine has shown that traditional media is still most likely to generate a response from the 18-24 year old market.

In fact, young adults are slightly more likely to buy a product or service after seeing a promotion advertised on TV than the general population (28% of respondents aged 18-24 compared with 27% of all consumers).

But it is posters and radio that really deliver more impact with this age group: 10% of 18-24 year olds responded to a promotion advertised on a poster, compared to the UK average of 6%, while 5% responded to a radio ad, compared with the average of 3%. It is certainly true that some digital channels have a disproportionate impact with young adults.

While the 7% who respond to promotions on social networking sites may not seem high, it is more than twice the UK average (3%). Similarly, the 3% of young adults who respond to material sent to their mobile phones is 50% higher than the national average of 2%.

But not all digital channels deliver the youth market: email, for example, only works on 18% of 18-24 year olds, compared with the average of 24%. The research also highlights a real difference in behaviour between 18-24 year olds and the next age group up, 25-34 year olds (see table).

The latter are a lot more likely to respond to promotions in general, but particularly those using direct mail, email, couponing websites and brand’s own websites. Nathan Bartlett, head of retail at ICM, comments: “The data seems to be reaffirming the belief that 18-24 year olds are a difficult group to target.

Their overall lack of responsibility (they usually have no mortgage and access to parent’s money) reduces their need to respond to promotions generally. We can hypothesise that it is only when their responsibilities increase and their lifestyles become less transient, moving towards the 25- 34 year old subgroup, that promotions become more relevant to them.”

Many in this age range are students, of course. Mitchell points out that students represent approximately half the youth market, and adds: “Students are somewhat immune to recession. They have money at university and the majority now work part-time to supplement income. But in my experience, 18-25 year olds always find the money for what they want.”

Not everyone agrees that young adults are hard to reach. James Eder, co-founder and commercial director of studentbeans.com, argues: “They are usually clear on what they want and have fully-formed perceptions on different products, services, brands and outlets. Brands need to therefore push out messages that are relevant to the youth market and via mediums that they actually use.”

Nathan Bartlett also points out that while some young adults do react to some traditional media approach, the research results may be skewed because promotional activity through newer media channels may not always be recognised as such. “The channel itself could reduce the feeling that it is direct selling,” he says.

Engagement via social media is increasingly being used. Last month, research agency Conquest released a report into the social media habits of 16-24 year olds. It found that over a third of respondents said they have become a fan of at least one brand, product or company on Facebook.

Another major function of social media is the ability to share promotions, and brand information with friends. James Layfield, managing director at agency The Lounge Group, comments: “There is no one channel that’s right. It’s more sophisticated. There is a three screen generation who will sit with the TV on while on their laptop and mobile using all three at the same time. The youth market fully embraces social and geo-location functions like Facebook Places and BlackBerry Foursquare. Sharing is the way that you do everything.”

Layfield continues: “Our ethos is ‘only the market gets the market’.” The Conquest research found that 91% of 16-24 year olds check their Facebook accounts over six times a day, with 30% on the site for over an hour a time.

This represents a major opportunity to reach the youth market, argues James Eder at studentbeans.com: “Brands are looking to build loyalty among a sector with disposable income and who are forming their brand allegiances and purchasing choices for life. Today’s students are tomorrow’s ABC1 consumers.”